(VELINO) Roma, 11 May - The "Commedia dell'Arte" workshop by Italian actor Fabio Mangolini is ongoing in Montevideo until 13 May. The event is organised at the Teatro Solis da Proyectando Cultura - Intercambios Culturales in partnership with the Italian Cultural Institute in Uruguay. Mangolini, who was born in Rome in 1964, earned a degree in philosophy from the University of Bologna. In 1984, after participating in the Cantiere Internazionale d'Arte (International Art Workshop) in Montepulciano, he was called by Marcel Marceau to enrol in the Ecole Internationale de Mimodrame de Paris Marcel Marceau, from where he graduated in 1987 after attending a three-year course. In 1990, he was again called by Marceau to teach at the School (1990-1995). The following year he established contacts with Nomura Kosuke, Master of the Art of Kyogen, with whom he worked in Tokyo from 1992 to 1994, also thanks to the Artist Fellowship Program of the Japan Foundation and to the Grantship of the International Theatre Institute awarded through the Ministry of Culture of Japan (Bunka-cho). In Japan, Fabio Mangolini also worked with Hideo Kanze, Master of Noh, and with the Warabi-za theatre and dance company. vel
. 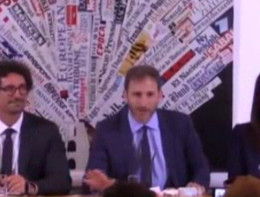